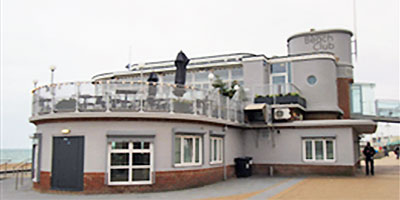 The Club is located on Brighton Beach and caters for dinghy sailing.  BSC sail and race a mixed fleet of monohulls and catamarans, mainly in the area bounded by the city’s two piers.  Their facilities include a boat park on the beach, storage facilities for sails and spars, plus changing rooms accompanied by a members’ bar, situated in a perfect position on the lower promenade.

The club runs races on Sunday mornings from early April to late October. There is also the opportunity to take part in sailing days that allow members to sail together, without the pressure of racing.  Boat owners can set sail from the beach at any time. Alternatively, there is the opportunity to crew for the catamaran owners who are often on the lookout for crew. The club also owns boats – mainly small monos.