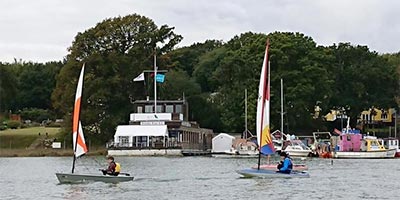 Situated at the mouth of the river Hamble is the current clubhouse of Hamble River Sailing Club. Founded in 1919 by a group of nine Hamble men the primary objective of the club was “to encourage the sport of small boat sailing and racing”.

The clubhouse consists of modern facilities, a bar, changing rooms and a training room. The club’s clubhouse and bar is available for hire for private functions, subject to terms.

The club is one of the premier sailing clubs in the U.K. Many of today’s leading yacht designers, mast manufacturers and sail-makers learnt their skills in the dinghy classes at Hamble River S. C. This era reached a peak in 1972 when six of the 13-man Great Britain Olympic sailing team were Hamble River members and they brought back a Gold and Silver medal.

The club expand to include yachts as well as dinghies. The club boosts the development of the prestigious Hamble Winter Series which was founded in the 80’s as an end of season club event which has grown exponentially, developing further to the premier Autumnal series.

The Club owns a fleet of dinghies that are available for hire by Members. These include a range from  RS Visions,  RS Fevas, Teras, Lasers, Picos, Mirror, Topper, Foxer, Optimists

A major sponsorship drive over the past few years has seen the arrival of several new dinghies for club use. A grant from the Flagstaff Trust will enable the club to provide a number of sailing schools this season for the club’s cadets. As a result of these initiatives there is a regular programme of youth sailing and racing.

The Bar is open on Friday evenings and Sunday lunchtimes during the winter. During the summer the club is also open on Wednesday evenings for club racing and at the weekend.