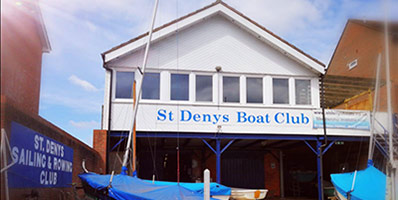 Located by Cobden Bridge in Southampton. The club boosts making boating accessible for everyone and offers a selection of boats such as sailboats, canoes, kayaks, paddleboards, rowing boats for everyday use.

St Denys Boat Club was founded in 1889 as St Denys Amateur Rowing Club, when St Denys was a village standing in the fields alongside the tidal Itchen. The local worthies, especially the church, decided that the local young men would benefit from the exercise and teamwork that rowing could offer and a deal was done with Dyer’s Boatyard for the use of boats and premises. Membership was initially restricted to the tything of Portswood and Bitterne.

The Club today owns a range of boats which would astonish the original membership. Boating has evolved from purely rowing to take in all aspects of getting afloat. The oldest boat dates back to 1907, while the newest are constructed in more high-tech materials. Gorgeous clinker-built rowing boats which would grace Wind in the Willows, rub gunwales with modern, sliding seat skiffs.

As well as the rowing fleet, there are all sorts of canoes: singles, doubles, Canadian and sea kayaks. The sailing fleet starts at Topper and includes a Laser, a Pico, a Mirror, Scows, a Laser13, a Drascombe Scaffie, Lugger and Coaster and a Sailfish 18 sailing cruiser. For those with a good sense of balance, we have recently added an ever-expanding number of stand-up paddle boards to the fleet. In 2018, the club’s name was changed from St Denys Sailing and Rowing Club to St Denys Boat Club to reflect the ever-expanding range of boats and activities on offer.

Whatever kind of boat takes your fancy, we have it (Sunseekers excluded!) We are based at our boathouse just above Cobden Bridge on the River Itchen with instant access to the water via a slipway. Riverside Park is on the far bank. The atmosphere is totally informal and relaxed and complete beginners will find plenty of advice and assistance to get started.

Your annual membership subscription allows use of all the boats at no additional cost. There is no membership charge for accompanied children under 18, making this an affordable and ideal activity for families. It provides year-round fun and exercise and our rowing machines come complete with scenery and wildlife!

Members are provided with a key and can use any of the boats as time and tide permit. There is plenty of opportunity either side of high tide when boating is possible, usually about 6 hours a day. The Boat Club has a lounge and balcony overlooking the river, where you can buy tea coffee and soft drinks, or bring your own. There is a BBQ by the river which members are welcome to use. Sometimes it is just nice to sit and watch the goings on after a Summer evening on the water.

A lovely stretch of river winds about a mile upstream to Woodmill for rowing or canoeing and there is plenty to explore downstream to the Itchen Bridge. The top end of the river may not be as good for flat out sailing as Southampton Water but there is ample room for tacking and there are several events each year when we go further afield, such as up the Hamble or to Poole Harbour and Chichester Harbour.

Once you are a member, you can just turn up at short notice, contemplate the weather and then decide whether to go sailing, rowing, paddle boarding or canoeing. Or all four!

The Club has been in existence from 1889. Originally as St Denys Amateur rowing club and from 1960 to 2018 as St Denys Sailing and Rowing Club. Over that period three histories have been documented. The first was a paper booklet covering the first 50 years including write-ups and photos from various members of the time, entitled  “From Low Ebb to Flood Tide”, G M W Cotton.  Printed 1953.

The second covers the second 50 years of the Club’s history and was hand-written but not put into a finished format.