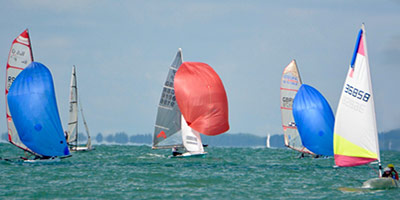 Located just outside Portsmouth Harbour, Stokes Bay Sailing Club is a friendly, competitive and award-winning sailing club.
Well established since 1854. The back story explains that the Stokes Bay and Isle of Wight Steam Boat and Telegraph Company built a pier to cater for the increased numbers of people holiday makers to the Isle of Wight to visit the newly built Osbourne House by Queen Victoria.

The Sailing Club was formed a year or so before the outbreak of World War II (1938). The pier was badly damaged during World War II and was eventually destroyed by the military. The remains of the pier can still be seen at a very low tide and a warning buoy is all that remains to remind us of this once grand structure.