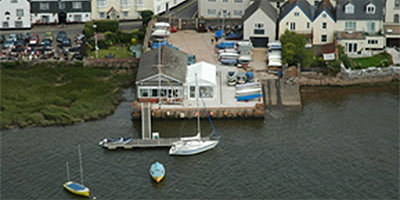 Topsham SC is situated on the upper tidal reaches of the river Exe on the south coast of Devon.  It occupies a favoured location very close to the heart of the thriving Topsham community yet its peaceful and tranquil setting has glorious views over the estuary and surrounding countryside.

Topsham Sailing Club has a a racing programme for weekday and weekends for both Cruisers, Dinghies and Yawls.  There is also evening racing with large fleets of 30+ cruisers and yawls.  These races are a mixture of class racing and handicap. The yawl fleet regularly hosts and compete in national events with great success. Equally successful is the cruiser fleet who take part in local regattas and coastal racing.

Club members also embark on cruises to destinations such as the Channel Islands, France and beyond, as well as cruises in company to the many rivers and harbours nearby.

TSC is very sociable with events throughout the year, including themed dinners, barbecues, skittles matches, fundraisers for the RNLI. The club has a bar and galley providing open after an evening’s racing.